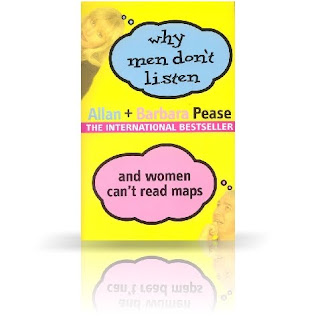 Why Men Hate to be Wrong

In being wrong, a man considers himself
a failure because he has not been able to
do his job properly

A million years of not wanting to see as failure seems to be wired into the brain of modern man. Most women do not know that if a man is driving in the car alone, he'd probably stop and ask directions. But to do it when she is in the car makes him feel like he is a failure because he couldn't get her there.

When a woman says, "Let's ask direction", a man hears: 'You're incompetent, you can't navigate'. If she says, "The kitchen tap is leaking,let's call a plumber", he hears: "You're useless, I'll get another man to do it!". This is the reason why man have difficulty saying,"I'm sorry". They see it as admitting they are wrong, and to be wrong is to fail.

To deal with this problem, a woman needs to make sure that she doesn't make a man feel wrong when she discusses problems with him. Even giving man a self help book for his birthday is often interpreted by him as, "You're not good enough".

A man needs to understand that a woman's objective is not to make him wrong; it is to help him and he should not take things personally. A woman wants to improve the man she loves but he interprets this as meaning that he is not good enough. A man won't admit mistakes because he thinks she won't love him. But the reality is, a woman loves a man more when he will admit his mistakes.